Friends  If you do not know what is CPU, then this article What is CPU in detail  is for you only.

What is CPU in detail

What is the definition of CPU

What are the functions of CPU

What are the types of CPUs

So to understand CPU better, read this article What is CPU in detail completely.

What is CPU in detail

CPU is an electronic device. The CPU is called the Central Processing Unit. Some people consider a big box attached with a computer as a CPU, but that box is not a CPU, but you can call it a cabinet.

CPU is considered as the brain of the computer? Just like in our body our brain directs and controls all our actions.

In the same way, the CPU in a computer directs and controls all the processes happening inside and outside it and that is why the CPU is called the brain of the computer

Where is CPU in computer

All the input process and processing of all the data/instruction in the computer, storage and outputting of the final result obtained after processing, etc., are all done under the supervision of the CPU itself.

In a way, we can say that the cpu does all the work done by the computer system and the cpu also controls all these tasks.
Therefore, the performance of our computer system is decided by the CPU itself. (you are reading What is CPU in detail)

Why is the CPU called the brain of the computer?

Just as a man can do all the work with his mind. In the same way, the computer also does all the work through the CPU itself.

When we input any data / information in the computer, the CPU processes that data / instruction and after processing it saves it in the computer’s memory device (storage device) or according to the user’s desire. Gives to the user through the device

As technology is developing, we are in need of Fast CPU because to process complex processes, Fast CPU is required which can do different types of complex calculations easily and simultaneously, its Also, can process many processes simultaneously i.e. can do multitasking.

What does cpu do

(Functions of CPU ) CPU is the most important device of any computer and all the work happening in the computer is done under the supervision of CPU.

The CPU does the work of inputting, processing, storing, outputting data / information in the computer, as well as controlling the entire computer system. (you are reading What is CPU in detail) 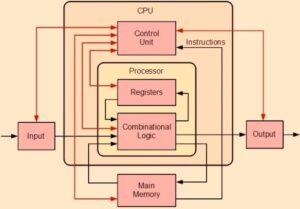 There are mainly 3 parts of CPU

Only CPU registers are the part which is considered in memory.

Let’s understand it in detail

For example, if any given condition 1 out of the instructions given in a program is true, then to do a particular task (like A)
Or to do some other work (like B) if condition 2 is true, ALU also does this type of logical work

Arithmetical Logical Unit, which is called ALU is a major part of CPU.

ALU is the place inside the computer where the instructions are executed.

All the calculations and comparisons in the computer are done in the ALU.

Then the work of data / instruction that has been processed so far
(which is called the intermediate result of processing) is picked up from the ALU and placed again in the primary memory (RAM).

At the same time, the second data / instruction from the primary memory ( RAM ) is given to the ALU to process

In this way, when all the data / instructions are processed one by one, then at the very end the final result is sent to the primary memory (RAM),

In this way all the data/instruction kept in the primary memory is processed by the ALU.

Control Unit picks up any instruction from the program lying in RAM and interprets it (interpreting it by extracting meaning in its language) and then generates a signal according to the interpretation and according to these signals the whole computer system works.

Control Unit controls all the processes taking place in the computer.

Apart from this, it also maintains coordination between all the input / output devices and processors of the computer.

CPU register is the smallest unit to store data in a computer and the data that is being processed is kept in it, that is why CPU register is also known as processor register.

In the cpu register, the data is kept in units of bits and here maximum number of bits are kept as many bits as the microprocessor can process at a time.

When you buy a computer, you can read in the computer configuration that 32 bit and 64 bit processor

There are many types of cpu registers and their number is different in all microprocessors according to the architecture of cpu.

Some important CPU registers are as follows

What is the difference between CPU register and Cache memory?

CPU registers are part of cpu and all operations on data are done in this,

Whereas Cache memory is also a part of CPU but there is no operation on data in it.

In this, the data is picked up from the RAM and kept for some time before moving it to the CPU register.
Until the cpu registers become empty and become available to process other data,

The size of the cpu registers is very small like in some bits, while on the other hand the size of the cache memory is slightly more than the registers.
Like in KB or MB

On the other hand, the data in cache memory is kept for a longer time than the cpu registers. 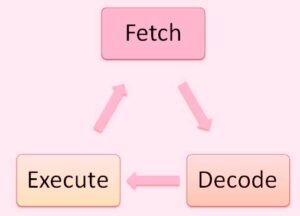 How does CPU work?

Let us know how CPU works in computer system.

The CPU takes the help of various auxiliary devices installed in the computer to do its work. The system of working of the CPU is in 3 phases.

This is the first stage of the CPU’s working system, in which the instructions are taken from RAM to the CPU, that is, received.

That is, any operation is divided into programs and after that the instructions lying in the programs are obtained one by one.

After which the cpu receives these sets of instructions one by one,

To know which set of instructions to fetch when, a Program Counter (PC) is used.

PC (program counter) contains the address of the next instruction present in the main memory (RAM) which is to be processed.

The instructions in the fetch step are stored in the Instructions Register (IR).
(instruction register is a part of cpu itself but it is considered in memory)

In the instruction decoder circuit, all the instructions are converted into signals.
After this all these signals are sent to different parts of the CPU.

In this step the decoded instructions received as signals are executed,

In which the control unit sends the decoded instructions as signals to the functional unit of CPU.

After this, the CPU completes various tasks according to the instructions, after which the result is stored in the CPU registers as output so that other decoded instructions can reference them.

What are the types of CPU

The types of computer CPUs are determined according to the capacity and speed of the CPU.

The higher the speed of the CPU, the more work the CPU can do in less time.
Currently CPU speed is measured in Gigahertz. Like 1 GHz, 2 GHz, 3 GHz etc.

Now if the speed of a CPU is 1.0 GHz, then that CPU will process up to 1 billion instructions in a second.

Software installed in a computer system works slowly or fast, it depends on the CPU of the computer.

So if you work on very big softwares then you should use only computer system with higher GHz.

Many people have a desire to know what is the core in the CPU.
so let’s find out 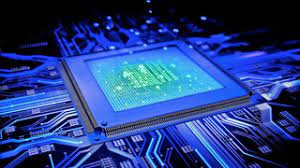 What is Core in CPU?

We also know CPU by the name of microprocessor.

Today CPU chips are made in some parts and all these parts work like a CPU chip and these parts are called core.

It’s just like our brain is also divided into parts

Data is processed in the core itself inside a processor and this core can be more than one in a processor.

The part of the core of the microprocessor (cpu) is called Threads.
The working capacity of any CPU depends on the core and threads of the CPU.

Also Read : CPU क्या है What is CPU in Hindi,CPU Core,CPU types,CPU Parts All in 1 information

What are the types of cpu according to core

A few years ago, CPUs were made in single core, but today CPUs with multiple cores are being used.

So let’s know how many types of cpu cores are there.

In single core CPUs only one operation can be done at a time.

Thus single core CPUs are not suitable for multitasking.

Because when a user wants to run more than one application, then the performance of such microprocessor gets degraded because to run another application in single core CPUs, the first application has to be closed.

By running both the applications simultaneously, the computer will become very slow, so there are no multitasking operations in single core CPUs.

Dual Core CPUs are also 1 single CPU but this CPU is made up of 2 parts i.e. it has two cores.

So it can do 2 different operations simultaneously like 2 individual CPUs, thus dual core CPUs are made for multitasking.

Dual core CPUs are faster than single core CPUs as it has the capacity of 2 processors.

The Processing Speed ​​of Dual Core CPUs is higher than Single Core CPU but less than Quad Core CPU.

The microprocessor which has 4 cores is called Quad Core CPU. It has the capability of a processor with 4 cores.

When we give some work to the computer and

If the computer has a dual core processor, then the dual core CPUs divide that work into 2 parts and give that work to execute both their cores.

And both the cores do that work together, which makes the work faster.

And if the computer has a Quad Core processor, then the Quad Core CPUs divide that work into 4 parts and give it to its four cores to execute and the four cores together do that work, which makes the work even faster.

The microprocessor which has 6 cores is called Hexa Core CPU.

It has the capacity of 6 core processor, so the processing speed of 6 core CPU is higher than Single Core CPU, Dual Core CPU and Quad Core CPUs.

The microprocessor which has 8 cores is called Octa Core CPU. It has the capability of 8 core processor.

There is a minimum of 1 core in any CPU, but till date the highest core processor is a processor with 64 cores and 128 threads, which has been called the most powerful processor in the world.

AMD Ryzen™ Threadripper™ 3970X and 3960X is considered as the world’s most powerful high end desktop processor which is AMD processor and this processor has 64 cores and 128 threads and has 288MB of cache memory.